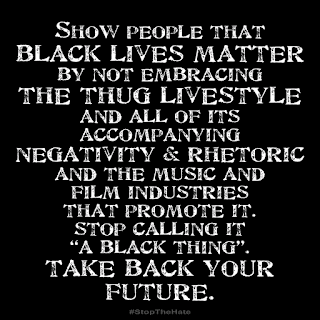 I'm bothered greatly by Black Lives Matter. Once you isolate a group or class from everyone else it can no longer be about equality, it's about exception. White Pride, Black Pride, Gay Pride. What's to be proud of? None of us did anything to be born White, Black, Gay, intelligent, athletic, artistic, etc.
It's too often about having one's way all of the time and not having any repercussions. With rare exceptions, BLM's martyrs were all men with violent criminal histories who were faced with the choice of following the law and cooperating with police or not. Choosing to believe they were the exception, not their race, lead to their demise.
Life exposes all of us to the differences between right and wrong. It's very simple; Don't hurt people and don't take their stuff. Yes, there is inequality between some Blacks and some Whites, but the same can be said among Whites and other Whites and Blacks and other Blacks. That is Life, not which lives matter.
As a rebellious young man I chose nonconformity and noncompliance as a way to express myself and to stand out as being unique (like all of the other nonconformists). These were choices like tattoos, piercings, partying, and clothing statements. I paid for them and still pay for some. My choices, my doing.
Heinlein said, “I am free, no matter what rules surround me. If I find them tolerable, I tolerate them; if I find them too obnoxious, I break them. I am free because I know that I alone am morally responsible for everything I do.” It actually goes much deeper than that, I am responsible in every way for every choice I make even within a world in flux.