It's Called "Work" For A Reason 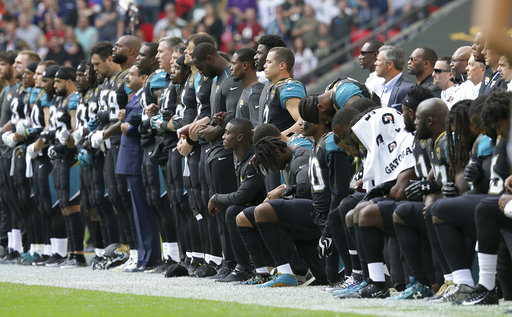 Each NFL team is a franchise. The teams have rules they have to abide by, as do the players. The games aren't a sport first, they are a business and a workplace.

You don't get free speech at any job. You represent the company and its interests or you quit or get fired. It's common sense, a good work ethic, and called being an adult.

It is the League's job to police the teams and the teams' to police their players and employees. The league should suspend any team's franchise that blatantly allows its employees to jeopardize its wellbeing, if not its very existence. It reasonably follows that those players who attempt to deliberately hijack their workplace should be fired, banned from playing, and possibly have to buy out their contracts.
There will always be things worth protesting. There will also always be appropriate places to do so.
Should an ethical vegan be allowed to work the register at McDonald's and expect to be permitted to wear a "Meat Is Murder!" pin on their uniform while working and keep their job? Of course not!
The National Football League needs to quit negotiating with PC terrorists, stay out of politics, and run like a business.
Last but not least, as an autonomous adult and a veteran, nobody gets to tell me when to be offended or who I have to boycott. If we'd all start thinking for ourselves, we wouldn't be such easy tools.
It should be pointed out to owners, players, coaches, and other team and league employees that we continue to be judged by the public in this area of respect for the flag and our country.
American sports have a huge history for being a platform for racial equality. These protests dishonor that by once again making everything about race.
#nfl #protest #nationalanthem #politicalcorrectness #unentitled #workplace#soapbox #acunninglinguist #rockcowles #gopackgo #salarycaps #fans