Children Are Not Property 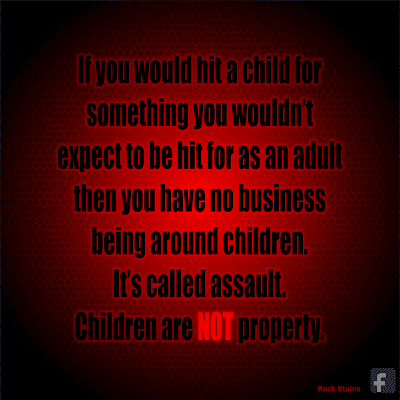 I was at a restaurant the other day and this huge woman repeatedly smacked the crap out of her little girl who couldn't have been two years old or understood what infraction could bring about such grief. I would have gone to jail for retaliating similarily on the child's behalf. WTF is the difference? I really should have called the police.
See Something, Say Something. The experience inspired this meme.

Your children are not your children.
They are the sons and daughters of Life's longing for itself.
They come through you but not from you,
And though they are with you yet they belong not to you.

You may give them your love but not your thoughts,
For they have their own thoughts.
You may house their bodies but not their souls,
For their souls dwell in the house of tomorrow,
which you cannot visit, not even in your dreams.
You may strive to be like them,
but seek not to make them like you.
For life goes not backward nor tarries with yesterday.

You are the bows from which your children
as living arrows are sent forth.
The archer sees the mark upon the path of the infinite,
and He bends you with His might
that His arrows may go swift and far.
Let your bending in the archer's hand be for gladness;
For even as He loves the arrow that flies,
so He loves also the bow that is stable.