Why I Will Not Deliberately #BuyBlack on this Black Friday, Facebook. 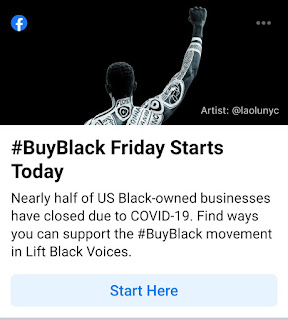 Facebook had the above ad on my newsfeed on October 30, 2020. I found it disturbing. I've have a facebook account since 2008 to keep up with family, friends, and business acquaintances, and to share common interests. We do not need Social Media taking on the roles of Big Brother and The Nanny State. When you seek special treatment for any group of people it is done at the expense of every person not contained in that group. It is the opposite of equality. Many small businesses have closed their doors permanently due to the pandemic and gross government overreach. When I heard that Goorin Brothers Hat Company, America's oldest hat manufacturer, which was founded in 1868, had closed eleven of their twenty-seven neighborhood shops I was saddened by the loss of jobs, communities, opportunities, and another piece of Americana gone. I didn't think it was sad that White jobs, Black jobs, Hispanic jobs, or any other kind of race jobs or businesses were lost. We need to learn to embrace what makes people unique, rather than fear or distrust it.

Yes, Black Lives do matter. No, I will not support a business just because it is owned or not owned by people of any race, religion, color, creed, gender, sexual preference or identity, or national origin. I patronize businesses on my interest in their goods or services, recommendations, perceived value, and past experience. I do make an extra effort to give small local businesses my business if they are reasonably competitive because I like supporting my community and neighbors. I don't worry about anyone's race, color, nationality, etc when I do so.

All lives matter. The Black Lives Matter movement has not only been hijacked by Socialists, but it has also inflamed America, built hatred and distrust, and severely set back race relations in the once Land of the Free. The people behind the organization are blatantly evil. Their agenda does not include the betterment of people of color no matter what their words say. They are dividing America.

I once read that racism was when someone was denied trial treatment or rights solely based on their race and that racialism was whenever someone doesn't get things their way then they blame it on racism. In an age of political correction and Newspeak racialism had become rampant and actually contributes to creating more racism.

The brilliant Black economist, Thomas Sowell talks about race hustlers like Al Sharpton and Jesse Jackson, Jr who make everything about race. Sowell wrote an incredible piece called Black Rednecks and White Liberals. It's well worth reading and contained in a book of essays by the same name.

We have forgotten how to not only think about others but how to be responsible for our own happiness and well-being. It is not the government, Hollywood, or social media's place or duty to do either. We need to take back our future by walking in love, taking personal responsibility, and building communities. How many people reading this know most of their neighbors, have a diverse mixture of friends, and volunteer outside of the home?

I challenge you to spend one fourth of the recreational time you spend online including social media, for the next month, volunteering at two or more local groups outside of your church or normal functions. Meet some new people, make some friends, expand your horizons, experience paradigm shifts, be a better, bigger person, grow, and see if the world doesn't become a better place. Walk in love. 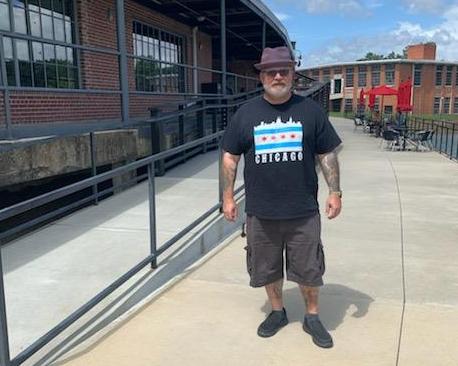 I'm not fat. I have fat. It's not me, it's extra me. It's not who or what I am. It doesn't define me. It doesn't show you my heart, my history, my intelligence, my kindness, integrity, compassion, sense of humor, courage, adventurousness, creativity, or the love that I have for people or that people have for me.

It doesn't tell you how it got there, what it has cost me, or who I may have been before it came to be. It's just there. It's not healthy. It's rarely fashionable. It takes a lot of energy and it still takes its toll on the rest of me. I don't embrace it, but I accept it. It doesn't define me. 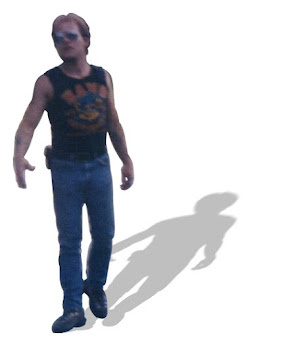 I may have lost hundreds of pounds over my life through hard work, perseverance, and sacrifice, but they never put that on my pants size. I may be eating healthier than anyone you know and exercising several hours a day and if all you see is fat, you'll never see who I am or who I may become.

Chubby face, meat wings, pudgy thighs, loose skin, beer belly, muffin top, wide load, cankles; swipe left. Not seen and yet gone. It's amazing and often disheartening that as big as I am, so few people can see me. Really see me beyond the blinders of social judgment. I didn't start off with fat. Few people do. Few people make a conscious decision to pack on the pounds or even double or triple their body weight as adults. Sometimes it is poor choices. Other times its circumstances, nurturing, genetics, accidents, injuries, emotional issues, disease, or other health problems. We hate Adipocytes, also known as lipocytes and fat cells, but without them, each and every one of us would die.

It's still socially acceptable to mock, ridicule, and condemn the obese so long as you don't do it at work or school. I've never heard anyone proclaim "Fat Lives Matter!". For that, I'm glad.  I'm not fat. I have fat. It's not me, it's extra me. It's not who or what I am. It doesn't define me. 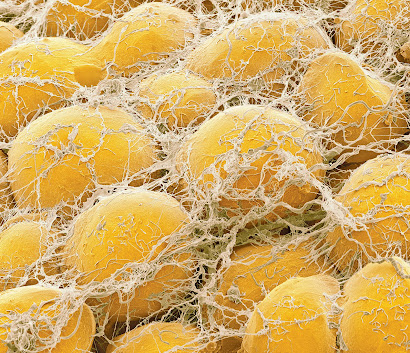 Brother, can you spare a fat cell? 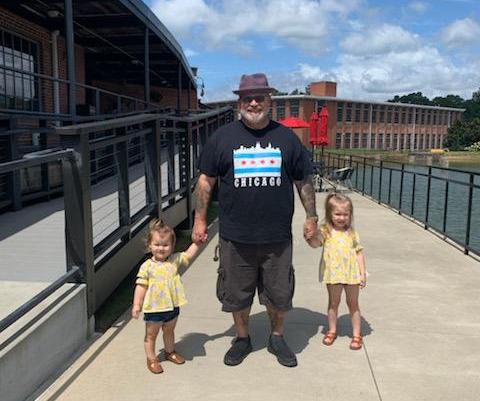 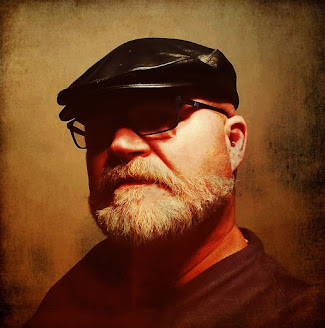 Hi, my name is Rock Cowles.

As I often do, I went out for dinner tonight with myself and a book. My waiter was a big burly young guy with a weightlifter physique and a bunch of decent tattoos and a pleasant demeanor. Other than his size, he had the potential to be utterly forgettable, because he never told me who he was. About halfway through my meal, I asked him if I could offer an observation and he agreed. I told him I had worked in a lot of different occupations including sales and managing businesses, and that he should always introduce himself, even if he was wearing a nametag (which he was not). By doing so, he becomes a person instead of a non-entity, or a restaurant fixture. I believe when you do this, not only do you become part of the customer's pleasant experience, but they will be more patient and tip better. They both realize that you aren't afraid of them and that you want them to enjoy their visit. I could see the light pop on in his head and he said, "I'm Seth."

I like to think I have good people skills. Overcoming various personal adversity and spending a lot of years observing people definitely contributed. Being a voracious reader and being exposed vicariously and through meandered down the road less traveled in real life to a lot of different environments and personality types has helped too. So has learning from my mistakes. If hindsight is 20/20 why do we make the same ones so many times?

I sold Chevy and Cadillacs in 1987 and my Sales Manager gave me a copy of the book, How to Sell Anything to Anybody by Joe Girard and Stanley H. Brown. It was a game-changer and is still very recommended. I still have the book and its sequel, How to Sell Yourself to Anyone. Joe was the Guinness Book of World Records' World's Greatest Salesman. Every interaction you will ever have with any other individual, bar none, is sales.

When I was a police officer the book, Verbal Judo: The Gentle Art of Persuasion, Updated Edition by George J. Thompson and Jerry B. Jenkins. I spent almost five years on the job. I had very few physical alterations and never had to hit, shoot, beat, or pepper spray anyone and I was a very active officer with an excellent arrest and conviction rate. I peaceably dealt with the same people my coworkers had to fight on a regular basis, but I utilized more tools and did so more effectively than many of them. I had a vested interest in helping people. Many of the tools in the book were invaluable. So were sales techniques and the magic phrase, "I can understand that."

Our job here is to be a part of something bigger than ourselves. To interact and to leave the world a better place then we found it. We don't need fancy titles or degrees to mentor people and it can and should happen anywhere and everywhere. It's easy to complain about the ignorance and entitlement of Today's youth. It's even easier to connect and try to be helpful and bring us closer together instead of dividing us as individuals and as a nation further apart.

My name is Dave "Rock" Cowles. Thank you for reading my blog today.

BOHICAWOCKY, 2A, ATF, FFLs, and CWPs 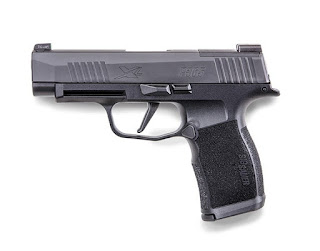 If a state reciprocates with mine for concealed carry permits, why should I still need a federal FFL CHECKPOINT to buy, sell, or trade a firearm with someone in or from that state? Why is it so much cheaper for a dealer to ship a firearm to an FFL holder than it is for Joe Citizen to do it legally and "properly"?

How does the guy an hour away in North Carolina keeping the P365 XL that I want and me keeping the P365 that he wants in South Carolina keep anyone safer? I'm closer to his location than I am to over 90% of my state and I can legally carry my pistol in his. We have both gone through extensive background checks to get our permits.

When will this blatant infringement of our natural rights and second amendment rights be addressed and ended?