I am always a little impressed by GoDaddy founder Bob Parsons. The GoDaddy girls are hot too. Here is a recent sagely piece of advice for businesses in these difficult economic times.

Have a happy, healthy, and prosperous new year.
Posted by Dave "Rock" Cowles at 10:41 AM 1 comment:

Big Three Bail Out; NOT!

Hi all. I'm going to step away from talk about caricature for a moment and talk about the proposed bail-out of the Big Three. I am glad the Senate knocked it down. I have nothing against Michigan or it's people. As a matter of fact, Detroit is my birthplace.

A bailout should never have even been proposed. It is illegal and unconstitutional and any elected official who voted for it should be impeached. Period. The same goes for the Fannie Mae/Bank bail out.

Visit www.notyourstogive.org. It is a phenomenal piece by Col. David Crockett that will help anyone understand why this is a misappropriation of funds, illegal, and absolutely wrong.

It closes with the following quotation;

"A democracy cannot exist as a permanent form of government. It can only exist until the voters discover that they can vote themselves largess from the public treasury. From that moment on, the majority always votes for candidates promising the most benefits from the public treasury, with the result that a democracy always collapses over loose fiscal policy, always followed by a dictatorship."

"The average age of the world's greatest civilizations has been two hundred years. These nations have progressed through this sequence: From bondage to spiritual faith; from spiritual faith to great courage; from courage to liberty; from liberty to abundance; from abundance to complacency; from complacency to apathy; from apathy to dependence; from dependence back again into bondage."

The above was penned by Professor Alexander Tytler over 200 years ago while we were still a British colony.

I hope you will take the time to read and study that piece and then contact your local news media and elected officials.

Before I am a caricaturist, I am an editorial cartoonist at heart. Sometimes I just have to make a point, even if it isn't a good one. I hope enough of you will share my warped sense of humor that this was a worthwhile endeavor.

Everything I need to know about life I learned at the NCN Convention
Compare your work to your work, not to others. There will always be somebody better than you.

Good is often the worst enemy of best.

To have a friend, be a friend.

You reap what you sow.

What goes around comes around.

Just because someone looks different than you doesn't mean they don't speak English. ARRGH!

The Irish are all nancy boys or disco queens.

Inspiration can come from anywhere.

Roger Hurtado isn't a megalomaniac. He's just really good. Well, maybe he is, but a hell of a nice one!

Keep moving or the world will pass you by.

With the possible exception of Adam Pate, most people are a hell of a lot taller than their avatars.

It hurts falling off your pedestal if you have clay feet. 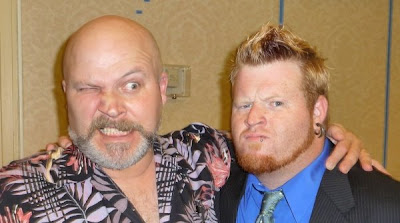 Asian men and women both look good from behind unless you are Mike Giblin and you get there after Joe Bluhm is done!

Rock and Roll is still king.

Its a poor craftsman who blames his tools.

Adam English is an awesome caricaturist as well as musician.

Great caricature doesn't have to be brutal.

The only person who can make you feel second class is you.

Tad wants to talk about sex when he drinks.

Start at the beginning.

The truly great caricaturists are all people people.

The Japanese bring their own Paparazzi to conventions.

Caricature can be a lucrative business as well as a joy.

Busy week or so

My wife, Marecho, is visiting the Philippines and I miss her a lot. Its to be expected. Its been a hell of a ten days since she left. Our dog Dazey was in a lot of pain and having trouble breathing Tuesday due to some extremely swollen lymph nodes in her throat. Once again the good vets at Pine Street Animal Hospital saved her fuzzy rump.

Saturday I received a phone call letting me know that my friend, Chavin Kendrick, had been shot and killed in a club in Gastonia, North Carolina.


I am trying to get ready for the 2009 National Caricaturist Network's Annual Convention in Raleigh and keep running into unexpected expenses to slim down my already thin budget, piddly car troubles, kidney stones, and other not so peachy surprises. Fortunately, unless God really hates me, I'll still make it okay!

I am looking forward to meeting so many great people and inspirational artists/caricaturists. There will be folks from all over the USA, Japan, England, Ireland, Belgium, China, Australia, the Netherlands, and who knows where else! I am quite jazzed about the whole thing. Regrettably, not all of the fantastic NCNers from the Forum can make it and many will be sorely missed.

I'll be posting a lot of pictures after the Convention. Check back soon!
Posted by Dave "Rock" Cowles at 1:38 PM No comments:

A few great caricatures of me!

Everyone loves a caricature. These are some of my recent favorites done of me so far by some exceptionally talented folks! 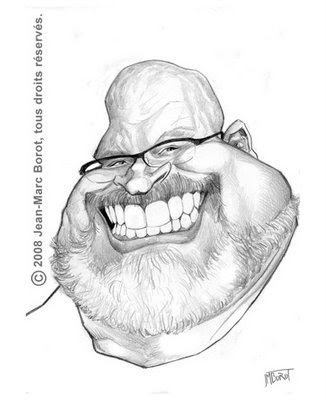 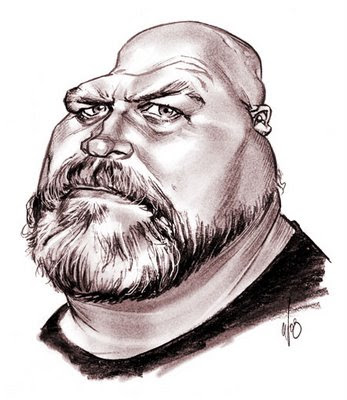 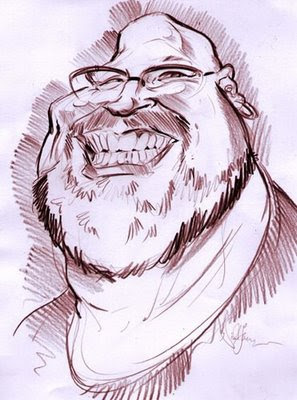 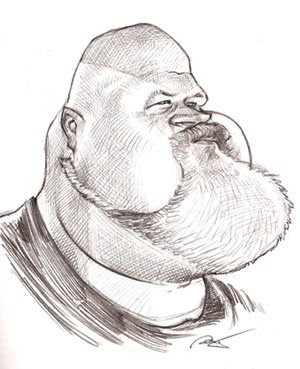 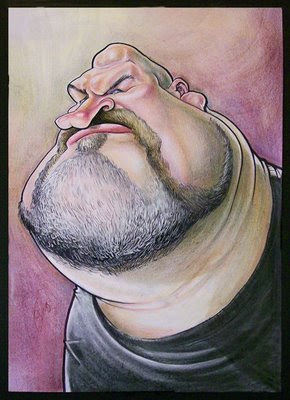 I am going to the National Caricaturist Network's Annual Convention in Raleigh, North Carolina during the first week of November. I am SOOOO excited too!
Posted by Dave "Rock" Cowles at 4:09 PM No comments:

Prior to my joining the NCN, a lot of my art was fairly stagnant (I realize now). One of the things I didn't do was side or 3/4 views on my 3D Caricatures, because the images would fragment if I tried to add a bevel. I learned how to get around that, piecemeal, but never got around to challenging myself to do one. I have been stretching myself a lot here, and took several risks with a caricature I owed a friend. For one thing he is almost at a 3/4 view. For another, he is doing something other than standing there and maybe holding something. I thought I'd share it. I'm pretty jazzed. 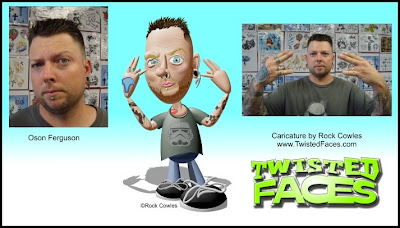 
I am finishing redoing a web site for Knotty Headz Tattoo Factory in Columbia, South Carolina. I included 3D Caricatures of the owners, Christian and Sabine. Great folks, very nice clean shop with some talented artists! 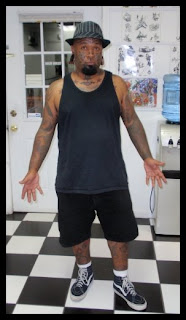 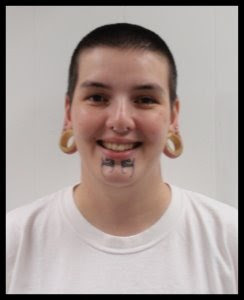 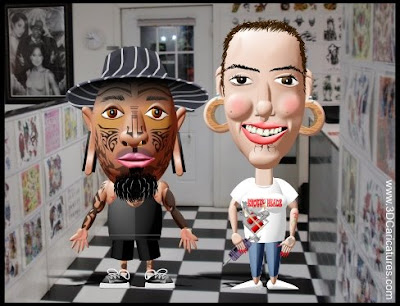 I ran this caricature by a few NCN members and they made some good points. THe changes are subtle, but I think they made for a much better caricature!

I have been working my butt off on a recent web design project, but did manage to finally finish this commission. 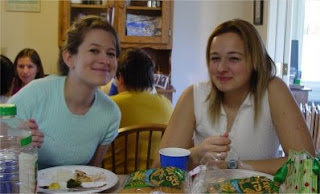 More, sooner rather than later, I hope!
Posted by Dave "Rock" Cowles at 12:42 AM No comments:

Email ThisBlogThis!Share to TwitterShare to FacebookShare to Pinterest
Labels: caricatures 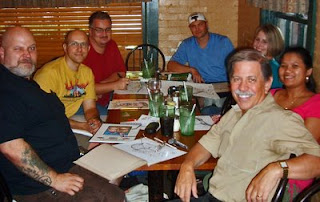 A group of five NCN Caricaturists, a wife, and a girlfriend got together at Side Street Pizza in Tryon, North Carolina yesterday for lunch, fellowship, some caricaturing, and to discuss the possibility of forming a Carolina or South Eastern Chapter of the National Caricaturist Network. Present were Brian Vasilik, Mike Paglia, Bill LaRocque, Bat Hilliard, Bat's lady, Lindsey, my glorious wife, Marecho, and me, Rock Cowles.

We split two exceptional pizzas, got to know each other a bit, and whipped out the drawing supplies! Everyone got drawn by everyone except the two ladies, who aren't caricaturists, but were eye candy with great senses of humor!

Nothing got resolved, other than chapter or not, we'd like to try to do this on an monthly or bi-monthly basis. We decided to find out what forming a chapter takes, and see about doing a little recruiting or at least find out how many interested parties we might have, at this year's NCN Annual Convention being held this November in Raleigh, North Carolina.

Please let me know if you're interested in the possibility of starting a Chapter with us. If you haven't already checked out the NCN and have an interest in caricature, visit the National Caricaturist Network at: www.caricature.org

Thanks for sharing your time with me!

I have added www.caricaturize.com to my domains and sites. I will be keeping www.3DCaricatures.com. RedhandedCaricatures.com will pretty much be a mirror site at this time.

My Slide Show also shows a lot of the newer caricatures I have done.

Thanks for stopping by. As some of you might know, I recently joined the National Caricaturist Network, I am working on developing my skills with other forms of caricature, beyond my infamous 3D Caricatures.

I recently registered RedhandedCaricatures.com and have been posting a lot of my new work there. Most of the caricatures there are of fellow caricaturists from the NCN's Firing Squad.

I will try to make this blog worthwhile by posting here also.

I appreciate your patience!