1996               2020                  Dec. 2021
As a young man, I was ten feet tall and bulletproof, or so I thought. Life has a way of catching up with us and sometimes bringing us to our knees in ways the Navy and Army never did for me. I developed bulging disks, Degenerative Disk Disease, Heart disease, a host of urological issues, Fibromyalgia, chronic kidney stones, arthritis, depression, Chronic Fatigue Syndrome, Carpal Tunnel Syndrome, Neuropathy, and chronic pain. I went from being a very physical and active 180-pound man, often riding a bicycle thirty plus miles a day and playing volleyball three or four evenings a week, to weighing 327 pounds, having had a heart attack, heart stents, and over three dozen surgeries, Yo-yo dieting, depressed, lethargic, and in chronic pain, and feeling like there was no way out. I locked onto the Vicious Circle Argument that I couldn't get fit because of all of my pain and issues and I couldn't reduce all of my pain and issues because I wasn't fit. Sadly, this is not uncommon.

In the midst of COVID-19, I felt I'd had enough. I had lost thirty pounds by starting smoking again and stalled there. I had used the free version of the My Fitness Pal app to lose seventy pounds before, but gained it all back and more when I quit using it. I was tired of feeling like my health was nickel and diming me to death and I was just waiting around in storage for the relief of a permanent dirt nap. I took stock of my life and the things I had to be grateful for and to look forward to and decided it was worth the effort as was I. I know plenty of morbidly obese people who live active lifestyles and that doesn't guarantee fitness. "Weight is lost in the kitchen, not the gym."

If you don't control your caloric intake, little else makes a significant lasting difference. I resumed using the free version of the My Fitness Pal app, only this time it wasn't a diet, it was an investment in myself and my family and a healthy lifestyle change. With the app, which you download onto your smartphone, you enter your age, height, weight, goal weight, and how much weight you want to lose a week. It then tells you how many calories a day you have. You can "earn" more by entering any exercising you do. It is essentially following a budget. It will give you suggestions on fat and sugar content and more, but it is your choice which, if any, to follow.

A banana is about thirty cents and a hundred and ten calories versus a Snickers bar that is about a buck and a half and 250 calories. The banana is healthier, more filling, and doesn't have the sugar crash a candy bar does. A half-pound of imitation crab legs (Pollak and other fish) is 220 calories, sweet, has no prep out of the package other than plating it, and it takes a while to eat and is thus more physically and psychologically filling.

I joined a local health club called Inman Health and Fitness. I've gotten where I hate working out just to work out, especially by myself, but they had an Over Fifties Class two days a week and Yoga on Fridays. This gave me socialization, support, cardio, increased muscle tone, flexibility, and a strong progress gauge. It helped me look and feel better. I went from 3XL T-shirts to Large or XL, from 3XL gym shorts to Large, and from a 48' waist to having 36' shorts falling off. I had a lot of support from the class and the gym owner, Gary Painter, who is a great guy and a specimen for any age.

I got where I rarely overeat and quickly learned to prepare for dining events that made tracking my intake difficult due to having no nutrition guides. I tend to eat less beforehand and guesstimate conservatively in those scenarios when making my entries. When you eat until you feel stuffed, your stomach stretches. A half hour or so later it shrinks and leaves you feeling famished and feral. I've learned to avoid this as much as possible and actually enjoy eating more.

After losing the weight, I continued to have several health issues including failure to heal from previous surgeries and was diagnosed with cancer and my activity level had to drop significantly as I had more surgeries with some serious downtime. I've kept the weight off, but look forward to returning to classes and riding my new Trek hybrid bicycle as the weather improves. I couldn't ride a bicycle to the end of my driveway before due to my weight making my knees feel like they'd explode.

I'm 57 years old now and I am here to say that you can teach an old dog new tricks and it's not over until it's over!

Memento Vivere! (Remember that you must live!) 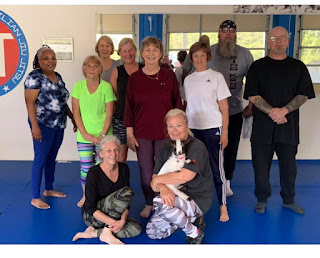